Median sales prices usually jump in autumn, to a large degree because of the seasonal increase in luxury home sales, and that is what happened in October. The combined house and condo median sales price was up 6% from October 2015, but substantially unchanged from the previous peak median prices achieved in spring 2015 and spring 2016.

The six weeks from mid-September to Halloween constitute the heart of the relatively short autumn selling season, with the market typically going into semi-hibernation from Thanksgiving through mid-January. (Sales still occur during this period and it can be an excellent time to buy with the big drop in competition.) Generally speaking, this autumn experienced further cooling in SF market conditions: October saw significant year-over-year declines in accepted-offer and closed-sale activity, and significant increases in price reductions and listings expiring without selling. Condos appear to be most affected on all these counts, with some decline in condo values: This situation is certainly being exacerbated by new condo projects coming on market at the same time that buyer demand has been softening.

The house market has continued to see declines in listing inventory and to shrink as a percentage of total home sales, thus becoming a scarcer commodity. It has performed much better, especially in more affordable neighborhoods. And sales of luxury houses suddenly spiked dramatically in October, though this appears to have been mostly driven by a huge surge in such listings in September. This jump in expensive house sales drove the median house sales price to its highest point ever in October, to just over $1.4 million. The condo median sales price in October, at $1,150,000 was above that of October 2015, but a tad below its all-time high in June. Please note that median sales prices are not perfect measures of changes in fair market value, since they fluctuate for a number of reasons, including seasonality and significant changes in the inventory of homes for sale.

Case-Shiller Index numbers all refer to a January 2000 price of 100, and track appreciation since then. Thus 243 on the chart signifies a price 143% above that of January 2000.

As mentioned in earlier reports, the highest pressure of buyer demand has shifted in the past year toward more affordable homes, and that is now showing up in the different price movements of low, middle and high-price tier houses. The Case-Shiller Index does not measure median sales price changes, but has its own special algorithm to determine same-home appreciation. This short-term chart illustrates how lower-priced houses have continued to appreciate rapidly, while mid-price and high-price houses have recently more or less plateaued, and condo prices have declined. The Bay Area Index for August 2016 was published in late October.

Pursuant to a big jump in new high-end home listings in September, luxury house sales in October, suddenly hit their highest point in many years, if not ever. This is illustrated in the red line in the chart above. Luxury condo sales reported to MLS, as seen in the blue line, were higher than in October 2015, but far below peaks hit in previous spring selling seasons. However, this does not count new-project luxury condo listings unreported to MLS, which are playing an increasingly large role in the market and creating substantial competition for resale luxury-condo listings.

Below are 2 charts breaking out luxury home sales by city district.

The past 14 months has seen the Chinese stock market crash, the oil price crash, Brexit, high U.S. financial market volatility, a slowdown in the Bay Area high-tech boom, and enormous election-related anxiety. It is difficult to tell exactly how these events may have affected real estate markets. However, despite significant affordability issues and the transition to less heated market conditions – as illustrated in the analyses of this report – so far, we have seen no sign of anything approaching an impending crash in our local market.

Listings vs. Sales: The overall inventory of house listings has persisted in declining, while house sales are basically even year-over-year. Condo inventory continues to climb (without including new project condos not listed in MLS), while sales have been dropping.

Percentage of Sales over Asking Price: Condos saw dramatic drops in this metric, illustrating a significant decline in buyer demand and competition.Overall, houses have seen a negligible decline, maintaining a very high percentage of sales over asking price. Luxury houses, as mentioned before, experienced a stronger October market than last year.

Median Percentage of Sales Price over Final List Price: All market segments saw year-over-year drops as buyers refused to overbid list prices on the scale of previous years. However, the general house segment still saw a 9.3% median overbid of list price, which is huge, even considering that some agents are consciously underpricing their listings. The other segments, with overbid percentages shrinking toward zero, are seeing a much greater quantity of sales negotiated below list price. And this does not include the increasing number of listings that are simply expiring, i.e. with no sale taking place.

Months Supply of Inventory (MSI): MSI measures how long it would take to sell the current inventory of listings for sale at the average annual rate of sale. All segments ticked up, indicating some market softening, but the general house market is still well within seller market territory. The biggest change is in the luxury condo market, where inventory has been hitting new highs, while sales have generally been declining, thus putting the segment in buyer market territory. Again, these figures do not include the large number of new-project listings and sales unreported to MLS, which would probably increase the condo MSI readings.

Average Condo Dollar per Square Foot Values by Era of Construction: Newer condos sell for higher average dollar per square foot values than older condos. Generally speaking, in 2016 there has been a tick down in this measure of value, which, as seen in the chart at the beginning of this report, correlates with the conclusion of the Case-Shiller Index as well. According to The Mark Company, which specializes in the marketing of new-construction condo projects (for which statistics are usually not available), average dollar per square foot values for brand new condos have dropped about 8% over the past year. This would presumably reflect the fierce competition between projects to sell out their inventories of units.

The two following charts are from our recent report on the Bay Area Apartment Building market, mostly focusing on San Francisco, Alameda and Marin Counties.

Rent rates in San Francisco have been dropping in 2016 after peaking in 2015, with estimates of the decline generally running in the range of 3% to 6.5%, but with some city rental agents saying that certain districts have seen slumps of more than 10%.We believe there are 3 big factors at work: a rush of large, newly built apartment buildings coming on market; a softening of demand as hiring trends have fluctuated; and affordability issues that have caused more prospective renters to simply turn away from living in the city, their first choice, and look elsewhere. However, even with the recent decline, the city still has the highest rents in the country.

Our Best Autumn Ever

We hope you will forgive our celebrating the fact that Paragon, which opened its doors in 2004, represented buyers and sellers in closing more in San Francisco home sales in October than any other brokerage. [Total dollar volume residential sales reported to MLS, per Broker Metrics.]

These analyses were made in good faith with data from sources deemed reliable, but may contain errors and are subject to revision. It is not our intent to convince you of a particular position, but to attempt to provide straightforward data and analysis, so you can make your own informed decisions. Median and average statistics are enormous generalities: There are hundreds of different markets in the Bay Area, each with its own unique dynamics. Median prices can be and often are affected by other factors besides changes in fair market value, and longer term trends are much more meaningful than short-term. It is impossible to know how value statistics apply to any particular home without a specific comparative market analysis.

Below are mapped analyses of recent Bay Area median home sales prices. This map gives an interesting, if approximate, overview of comparative home prices in the different areas of the city and Bay Area.

Move your cursor over the map to reveal city and neighborhood median sales prices. 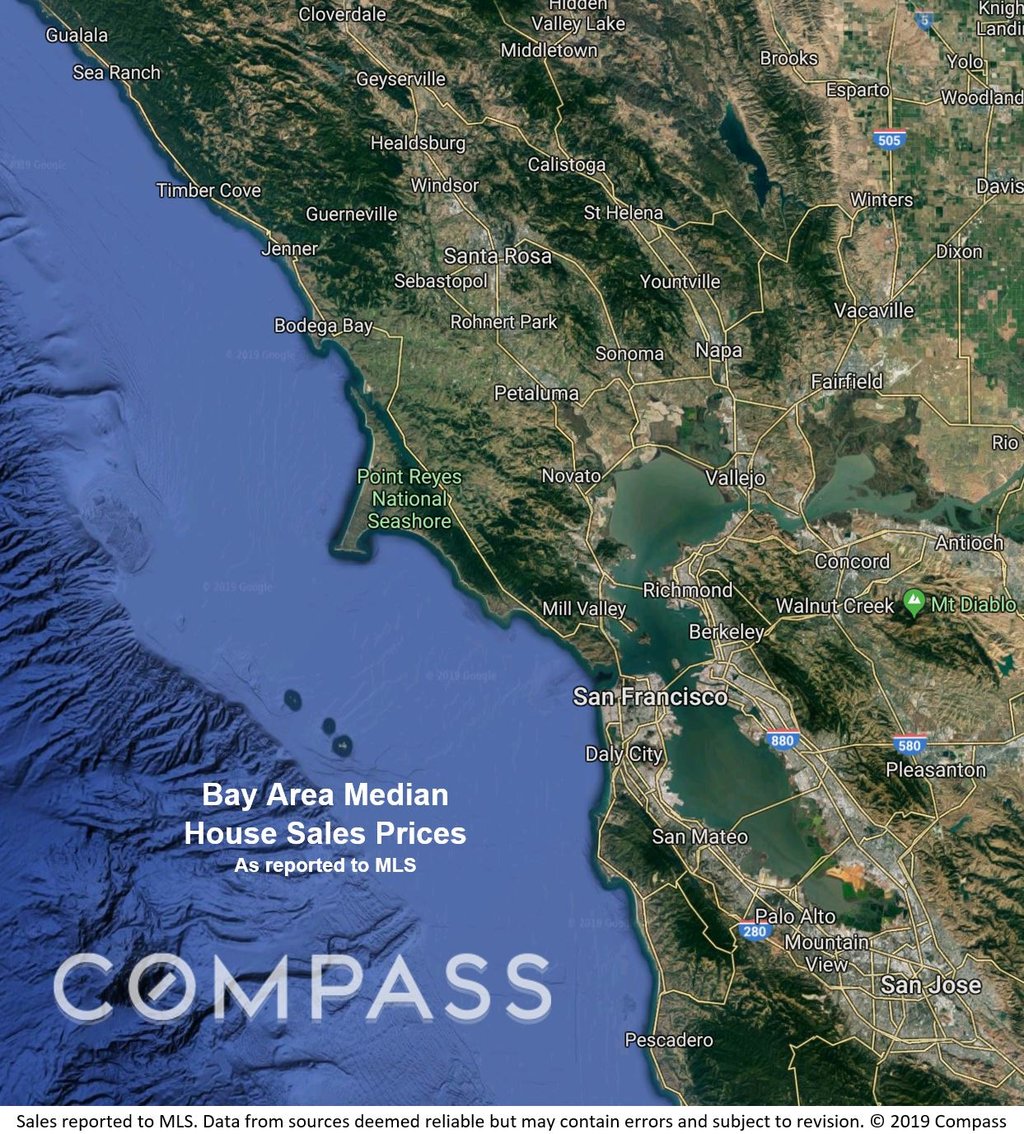 Mortgage rates moved even lower Tuesday, as the yield on the 10-year Treasury, which rates loosely follow, fell through new lows. Some lenders were quoting 3.25 percent on the 30-year fixed for high quality borrowers, according to Mortgage News Daily